It was a Challenging Year, but the Iris Bloom Made it all Worthwhile.

by Gary Salathe
The Louisiana iris Conservation Initiative (LICI), of which I am a member of the board of directors and a volunteer, managed to get 6,000 wild Iris giganticaerulea (a species of Louisiana iris) planted in refuges and nature preserves between last year’s bloom and February of this year. We needed to utilize local volunteers for this effort because COVID-19 pandemic prevented out-of-state college students from coming in to help. Before the pandemic our marsh restoration projects allowed the college students to fly into Louisiana from across the country in organized trips to accrue service credit hours by volunteering for local projects.
Our iris conservation projects rescue rhizomes that are threatened with destruction, and then we relocate them to area refuges and nature preserves. In the process, we are restoring irises to areas where they once were plentiful.
Over the last two years many more volunteer events were required because we were using local volunteers. The groups of six to eight older volunteers from the local area require more time to accomplish what 15 to 20 out-of-state college students could do in a single outing. 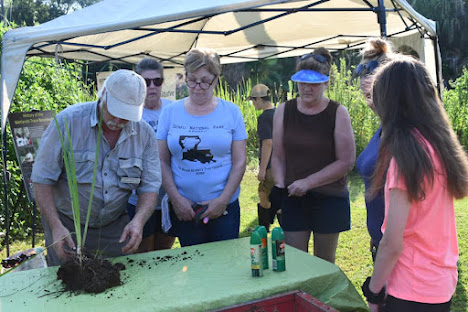 Local volunteers working on a LICI iris rescue in July 2021.
Another challenge we had in meeting our iris planting goal was due to our taking on a major tree-replanting project at a US Fish & Wildlife Service refuge. The refuge is also home to one of our largest iris restoration projects. The tree-planting project not only diverted our attention from rescuing and planting irises, but took up huge blocks of our volunteers’ time. However, a big positive was that we played a key role in reforesting an important area of the refuge after our volunteers killed off thousands of Chinese tallow trees. The tallow tree is an invasive tree species that out-competes native trees and crowds out the Louisiana irises.
What also added to the difficulty of matching the 8,000 Louisiana irises we rescued and planted in the 2020-2021 season was the fact our area was hit by very powerful Hurricane Ida on August 29, 2021. We ended up spending a lot of volunteer hours helping to get many of the refuges' boardwalks back in shape after they were damaged by the hurricane. The good news is that the irises at only one of our projects were significantly set back by the hurricane. The rest recovered in time for this spring’s iris bloom. 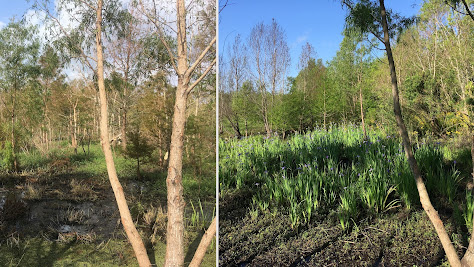 An example of the damage that Hurricane Ida did to one of our iris restoration projects is shown by these photos of the Louisiana irises at the Bayou Sauvage refuge in New Orleans. Right: before Hurricane Ida; left: the same area one month after the hurricane. We went in and planted 2,500 irises this past winter to help replenish the irises lost there to the hurricane.
As the iris bloom began, we switched hats from being iris rescuers to being amateur iris public relations specialists. One of our partners on many projects, Common Ground Relief, worked with us to create the second annual interactive Google map of where to go see wild irises in bloom. We ranked the 16 sites on the map from the best to the very good. We then published a Facebook posting of the map that ended up reaching over 47,000 people. Over 17,000 people actually clicked on the map. The map and the excitement it created resulted in numerous news reports about the locations found on the map in area newspapers, social media, and TV news shows. The end result was more people than ever going out to the sites - most of which were our iris restoration projects - to see the irises in bloom. It was a huge win for all involved, including the landowners that saw attendance pick up at their sites.

Since late January the college student groups have begun to return. We have already completed our first iris rescue and have two groups coming at the end of June that we hope will fill up the remaining containers at our iris holding area with irises for this fall and winter's plantings. We've had many new sites request irises and we still want to add more to our existing projects, so we have set a goal to get at least 8,000 irises rescued and planted during the 2022-2023 iris rescue and planting season. 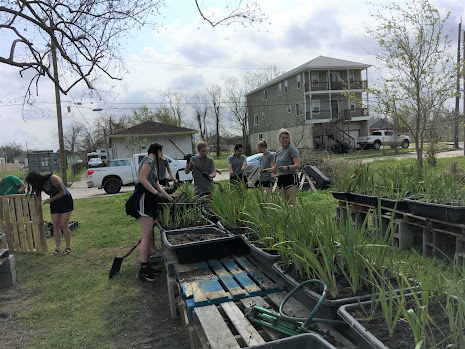 College students from Iowa State University are shown in March planting irises into containers at the LICI iris holding area in New Orleans. The irises were rescued by them that morning as the first LICI iris rescue for the 2022-2023 season.

For the rest of this blog posting, I’m just going to let pictures tell the story of the blooming irises at area refuge boardwalks and hiking trails during this spring’s bloom. Most of these sites were the locations of our iris restoration projects. 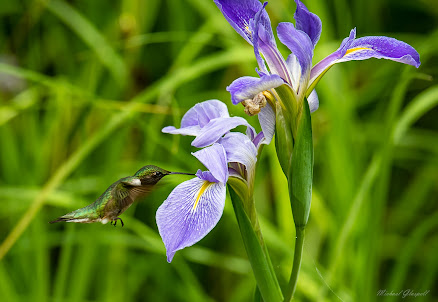 LICI volunteer Mike Glaspell once again took some great photos at the Lockport, Louisiana boardwalk this year during the iris bloom there. 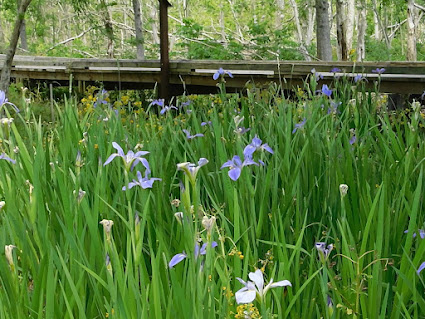 LICI board of directors member and volunteer, Paul Christiansen, sent in some really nice photos of the blooming irises at our Bayou Sauvage refuge project. 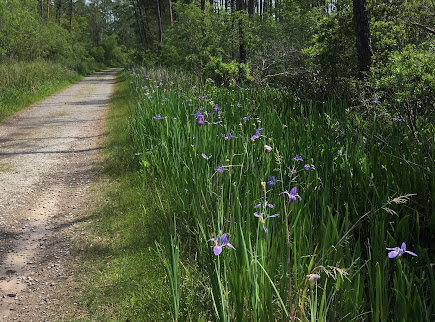 The naturally occurring Louisiana irises on the Boy Scout Road trail in the Big Branch National Wildlife Refuge once again did not disappoint. 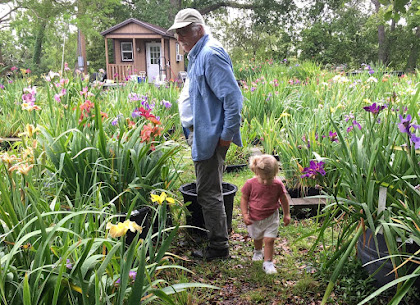 OK, I know this isn't a photo from one of LICI's projects, but I wanted to stick it in here because it had more meaning to me than any iris project I worked on this year.  It shows me introducing my 18-month-old newest granddaughter, Hazel, to Louisiana irises at the Greater New Orleans Iris Society's iris nursery during
the bloom there in April. 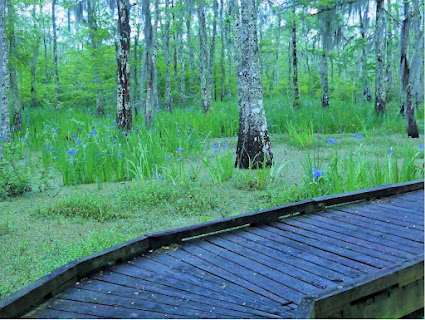 LICI's friend and volunteer, Henry Cancienne, took his annual tour of iris locations across south Louisiana again this year, sending us pictures almost every day. This photo was taken just before sunrise at the Bayou Teche National Wildlife Refuge boardwalk. 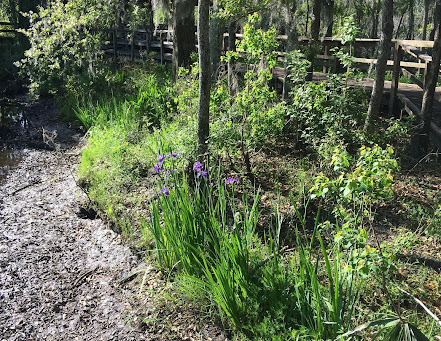 Irises blooming at the Town of Jean Lafitte boardwalk. The irises there took the biggest hit from Hurricane Ida, but still managed to produce some blooms as they struggled to come back. 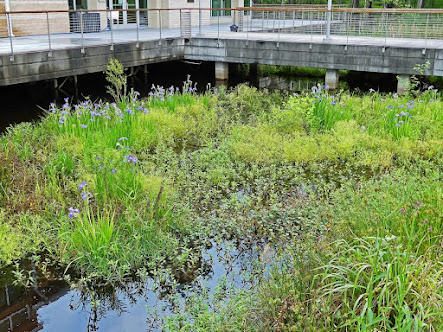 The irises at our project at the Cajun Coast Visitor Center in Morgan City, Louisiana are in their second year. They are beginning to put on real show in the swamp at the entrance to the visitor center. 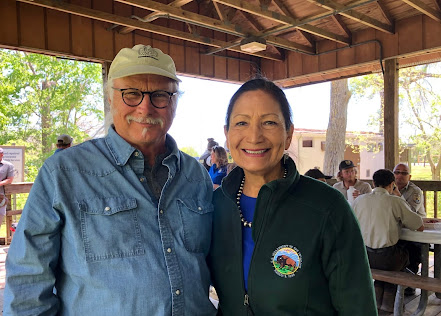 A personal highlight from this year's iris bloom (next to introducing my granddaughter to Louisiana irises) was getting to meet US Department of the Interior Secretary Deb Haaland during the crawfish boil held in her honor at the Bayou Sauvage Ridge trail boardwalk pavilion on Saturday, April 9, 2022. Her tour of the boardwalk was timed perfectly with the peak bloom of the irises in our project there. 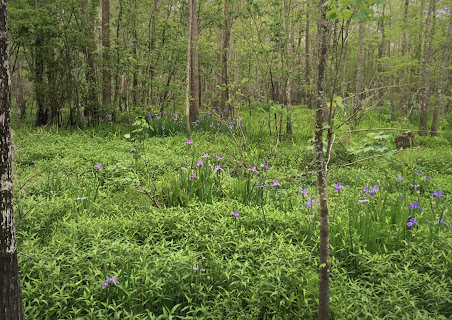 The irises blooming in our project at the Louisiana Wildlife and Fisheries Joyce Management Area's Swampwalk boardwalk did not disappoint. It confirmed that we made a good decision declaring it #1 on our map of places to see wild blooming irises. 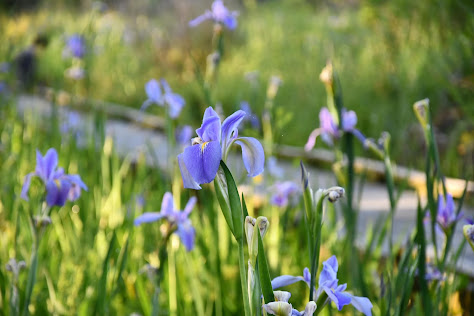 The irises at our Grand Isle, Louisiana iris restoration project accomplished the job we hoped they would; they brought people into this hard-hit area helping businesses come back from the direct hit they took from Hurricane Ida. 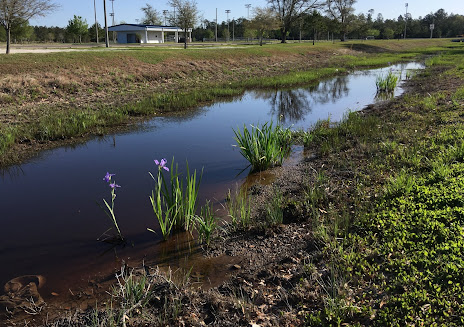 Our new project at the Pelican Park Recreation District in Mandeville, Louisiana is not very impressive - the first year bloom never is. I included this picture because what is impressive and very exciting to us is that the director has given us permission and encouragement to fill the entire shoreline of this detention area with our rescued irises as far as you can see in the photo. The plan is for them to grow them out for our future iris restoration projects. 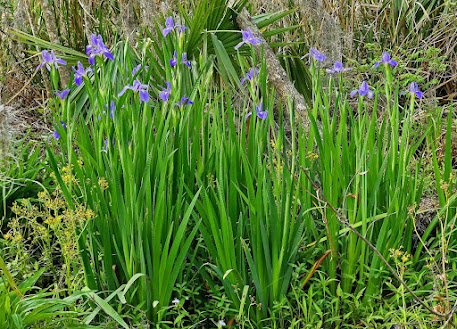 The irises at our project in the Mandalay National Wildlife Refuge are doing great and are expanding. 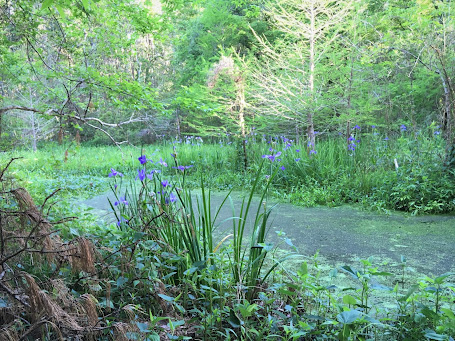 The irises in the "Iris Grove" at the Northlake Nature Center near Mandeville, Louisiana are expanding again after being knocked back by high water in 2021. 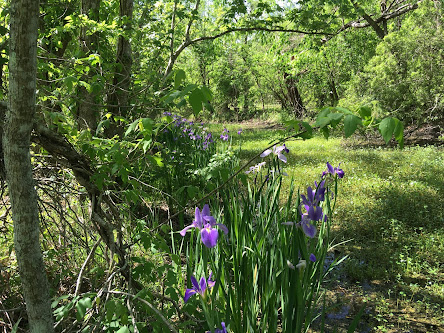 The irises in our project at St. Bernard State Park are only in their second year, but they really put on a show this spring when they bloomed. This is another one of our projects that has real potential. 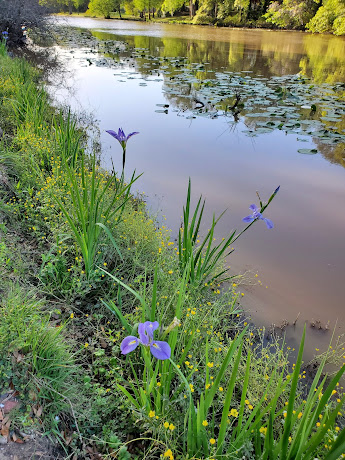 Ordinarily, I would not have included this project in this year's list.  It's on the banks of Bayou Teche in City Park in the town of New Iberia, Louisiana. It's only the first year, so by my standards, the bloom was not that big of a deal.  However, I included it because the local folks from the town that are helping us with this project reported that it created quite a stir in the local community, plus our volunteers were very excited about the bloom.  All I can say is that they need to wait until next year's bloom, because we plan on bringing in a few hundred more irises this year. 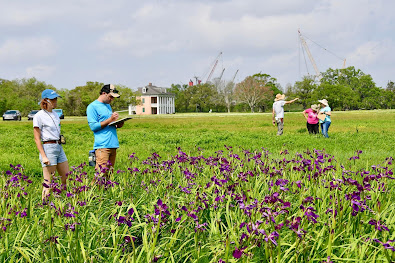 We did not plant any of the irises shown in this picture, but I guess you could say it's an iris project we are particularly proud of that we did this year. We helped the National Park Service count and map Louisiana irises that we found growing in the middle of the Chalmette Battlefield.  Info can be found here. 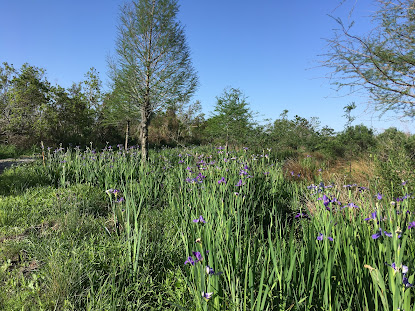 Louisiana irises blooming at our project in Fontainebleau State Park near Mandeville, Louisiana. 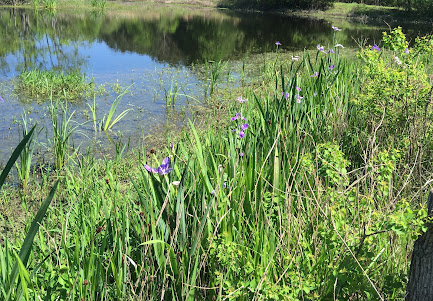 The irises we planted at Sankofa Wetland Park and Nature Trail in New Orleans are doing well in their second year.
The LICI Facebook page can be found here.

You can email Gary Salathe at: licisaveirises@gmail.com

Although LICI “is a bare-bones deal”, as Gary likes to say, he is quick to add that they can always use donations to their cause. They have a “Donate” button at the top of their website home page here. They are currently raising money for maintenance and supplies at the LICI iris holding area.