In my last article on the history of Dry Creek Garden, we left off with the acquisition of the property as a cattle ranch and it being deeded to Bertha Meyers from her mother Sofia in 1900. The first of three children, Mildred Meyers was born in 1898. Edith Meyers was born in 1900 and Jeanette Meyers in 1905. The cottage at Dry Creek, designed by their father Henry, an Architects, was constructed as a summer retreat from the family home in Alameda, Ca. (near Oakland, California) in 1900. The three daughters would spend their summers here and enjoy the wilds of the rolling hills with a meandering creek through the Dry Creek property. Before they would make the approximately 20 mile trek to the property, a trunk of their needs was sent to the cottage for them for the summer. It must have been a magical place for them to visit the ranch as it was fairly isolated then. Dry Creek is tucked into the foot of a canyon, protected by a high berm of land that shelters the area from wind. The cottage is about 20 yards north of the creek and nestled into the oak studded hillside. The wrap around porch of this modest estate faces south and looking down towards the creek and beyond. Another 20 yards south of the creek, another hill rises to make the gentle canyon complete. 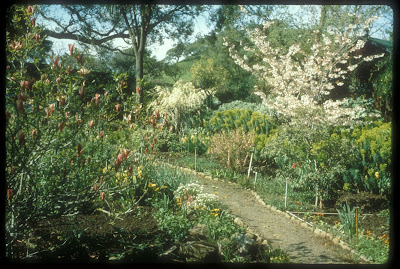 The Meyers sisters all attended UC Berkeley. This was unusual at a time when many women did not get degrees in mainly male dominated fields. Mildred became an Architect like her father in 1921. Edith studied medicine and became a Pediatrician at Children’s Hospital in Oakland in 1926. Jeanette attended UC Berkeley and studied Botany. It was Jeanette who wanted to develop the gardens at the family retreat at Dry Creek. So in 1928, she and her architect sister, Mildred started the layout of the gardens. 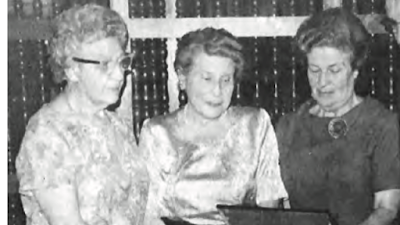 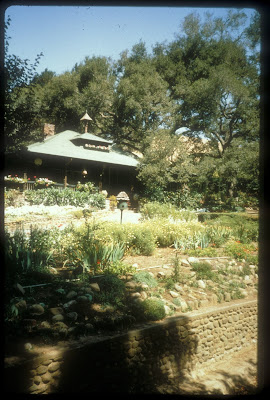 The stone pillars in front were built in 1930 along with the masterfully built stone walls lining the creek to contain it. A vehicle bridge was also built across the creek on cement buttresses. Two more walking bridges were constructed to access the future planting beds on the other side of the creek. Over the next decade, many new native and exotic trees were planted including Incense Cedar, Red Oak (East Coast), Buckeye (Ohio Species), Flowering Cherries, Coast Redwoods and many varieties of fruit trees. 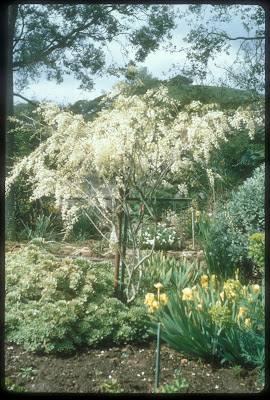 The California Nursery was also very close. This, I’m sure was their source of many of the species of plants in the garden. California Nursery Company was established in 1884. In the 1930’s, it would host bulb festivals that would see over 5,000 visitors in a weekend. They also sold plants wholesale and retail to the public. With it being so close, I am sure some iris were purchased there. Another connection the sisters may have had to iris was Jeanette’s botany classes at UC Berkeley in the late 1920’s to possibly early 30’s. With Sidney B. Mitchell being the University Librarian and Edward O. Essig being the chairman of the entomology department at UC Berkeley who in 1935 became an American Dyke’s Medal winner for Sierra Blue, and then there was also Carl Salbach in the Berkeley hills near the University. William Mohr also lived a few miles from Dry Creek. So as you can see, Jeanette had many opportunities to meet and get to know these early important hybridizers and introduce iris to the gardens at Dry Creek that still grow there today. So far I have identified, Alta California and California Blue as irises that have been here for at least 8 decades by my calculations. 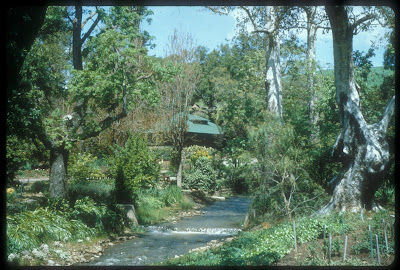 By 1941, work on the garden had halted due to World War ll. The war effort shifted the focus away from garden improvements until the war was over in 1945. Their father Henry Haight Meyers passed away in 1943 at the age of 75. He was a very prominent San Francisco architect and designed over 200 buildings and was the County Architect for Alameda County from 1912 to 1930. Henry’s wife Bertha S. Meyers passed away in 1947 at 78 years of age. 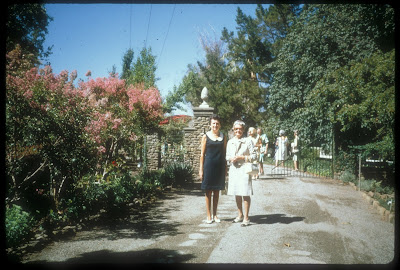 After Bertha’s passing the three sisters started new improvements to the property at Dry Creek. This included a swimming pool and cabana built in 1947 and 1950 respectively. These were the last major improvements done to the property. For Mildred, the Architect, this was her most significant construction to her name that was built. Being a woman, it was much harder for her to be the lead architect on projects in the private or public sector. Mildred retired in the early 1950’s. By 1960, Edith, the Pediatrician, had also retired from Children’s Hospital in Oakland. At that time, she donated $50,000 to the Hospital that has a room that bears her name and legacy. In 1960, $50,000 was a very large sum of money. With homes selling for less than $5,000, it could have  made them some great tycoons. But that was not their style. They were a very generous trio of sisters that never married and lived together their entire lives. With the two oldest working their careers, Jeanette took care of the duties in the home in Alameda and at Dry Creek. Part of their philanthropy began in 1951. They were members of The Alameda Welfare Council and decided to have fundraisers at the garden to raise funds for the council by selling items. To quote the local newspaper; “Country store booths will have a generous display of home cooked foods, handmade gifts, country fresh vegetables, plants and shrubs. After luncheon, guests may linger in the gardens for bridge, tables to be placed beneath gay colored umbrellas or on the wide cool verandas. There will be swimming for those that wish to do so.” These events were for women only and the attendees would number from 415 to close to 700 during the 20 years it was held.

I’ll stop here so that the next issue will show some of the newspaper photos and the annual themes that went along with the annual party.