Today the countries which made up the Soviet empire have become, behind the United States, the largest suppliers of new varieties of irises. It was only after the destruction of the Berlin Wall and the fall of the "Iron Curtain" that this exceptional development took place. But this does not mean iridophilia didn't exist there before these events. Despite considerable difficulties in obtaining western varieties capable of providing the necessary elements for their work, passionate gardeners made crosses and obtained irises which, although they did not reach the level of evolution and the quality of western varieties, demonstrated that they had genius. Nina Miroshnichenko cannot be overlooked in this context. Indeed, long before the disappearance of totalitarian regimes and the opening towards the West of what was once the USSR and its satellites, she had devoted a large part of her life to iris hybridization. 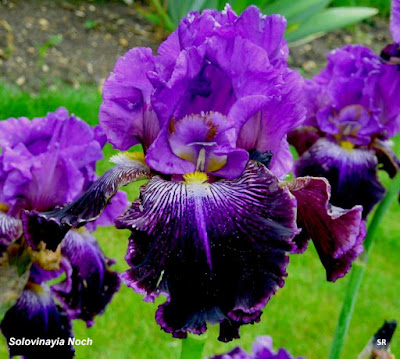 Antonina Opanasievna Miroshnichenko was born in the Kiev region of Ukraine on November 13, 1914. She therefore only knew the communist regime in her country and in neighboring Russia. She became interested in horticulture during her university years as she studied at the Kiev College of Agriculture (now an entity of the National University of Life and Environmental Sciences of Ukraine). As was fitting she subsequently worked as an agricultural engineer in Zhitomir (in Ukrainian: Житомир, in Russian: Житомир, in Polish: zytomierz), a large garrison town in western Ukraine a town that over the centuries experienced a complicated existence, passing from Poland to the Russian Empire, before becoming part of its current nation. She married an officer of the Red Army, but continued her work as an engineer nonetheless, especially in the city of Uzhgorod (in Ukrainian: Ужгород; in Russian: Ужгород; in Hungarian: Ungvár; in Romanian: Ujgorod, in Slovak: Užhorod), another city in western Ukraine, on the border with Slovakia, also very marked by Slovak, Austrian, Polish, Romanian and Hungarian influences. She lived there until 1956, before returning to Zhitomir where she remained until the end of her life, at age 95, in 2009. 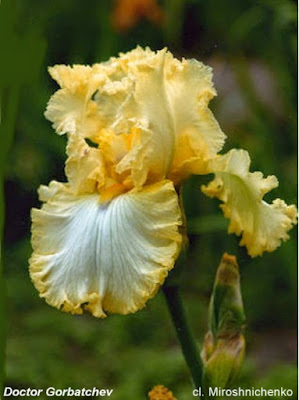 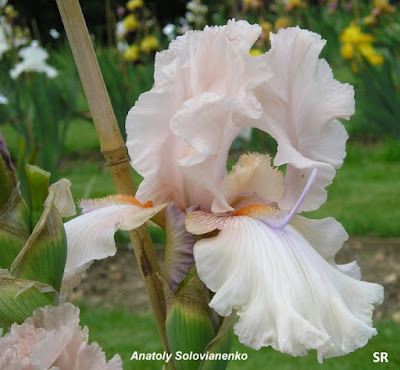 Was it the historical traces of the more western regions of Europe, or the inevitable contacts with the neighbouring states of Uzhgorod that led her to become interested in plants that were little known in her country of origin? In any case, as soon as she returned to Zhitomir, she began to hybridize gladioli and lilies, then irises. Circumstances, as one can imagine, did not allow her to come into contact with the few other iris lovers in the Soviet empire, so she remained a maverick of hybridization. She gradually acquired extensive knowledge of genetics and for many years pursued her little path as an enlightened amateur. Taking care to stay away from the events that marked the Stalinist and then Brezhnevian years, she hybridized only for her pleasure, without any idea of competition. As soon as it was possible, she occasionally sent some of her offspring to the West; it was more to find out if her work was worthwhile than to win medals! At some point she made a few dozen recordings of her crosses but  gave no indication of origin. Perhaps she had her own doubts about the varieties she used for hybridizing knowing the adventurous conditions under which American varieties were obtained at the time. 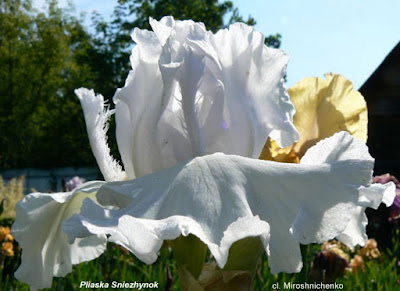 Her family, who religiously protected her work, counted nearly two hundred varieties preserved, even though only 41 were regularly registered. The greatest moment of glory for this production came when, in 2007, 'Soloviniyia Noc' won the FRANCIRIS © competition. I lived the moment when Milan Blazek, the great Czech irisarian, who speaks perfect Russian, called her on the phone to announce the victory of her iris, and I heard in the voice of this very old lady the joy and emotion of this remarkable consecration. Perhaps, indeed, it is Nina Miroshnichenko's masterpiece. It is an original iris, with light purple petals hemmed with white, and dark purple veined sepals. The plant is beautifully sized, healthy, robust, the flowers, well proportioned, numerous and long lasting. Everything you need to make a competitive iris. But a few other of her irises deserve to be mentioned. I think of 'Sladky Greh', of 'Novoye Vrema' - little cousin of 'Bride's Halo' -, also the spurred pink 'Anatoly Solovianenko', and of the very elegant inverted amoena 'Nebo Angelov'. And lastly of 'Doktor Gorbachev'. I also like 'Khmuroye Utro', an original smoked mauve, but now showing its vintage age. 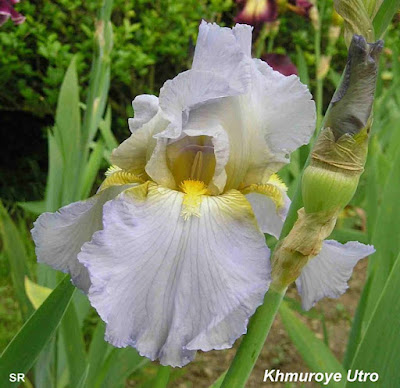 All these irises, some of which have found their way in some western gardens, are still available in Ukraine, where hybridizers like Igor Khorosh have used them in their crosses (such as the mauve 'Rozpriahaite Khlotsi Konei' which comes from 'Pliaska Sniezhynok' , a majestic pure white iris). They are also well known to Russian and Polish collectors. 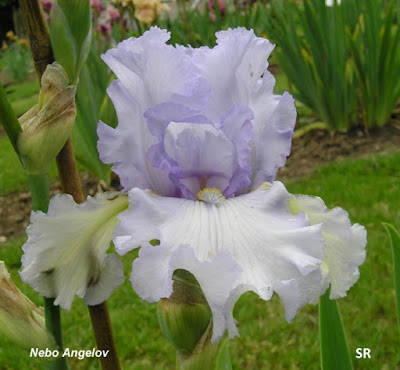 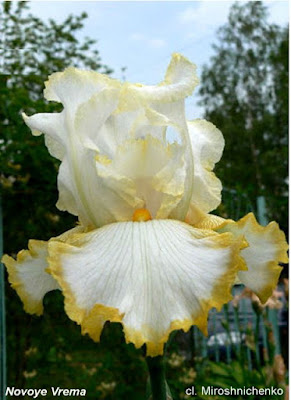 Our world of irises is filled with surprises that curiosity makes us discover with pleasure. Nina Miroshnichenko is one of them, and paying tribute to her is a duty but also a pleasure. 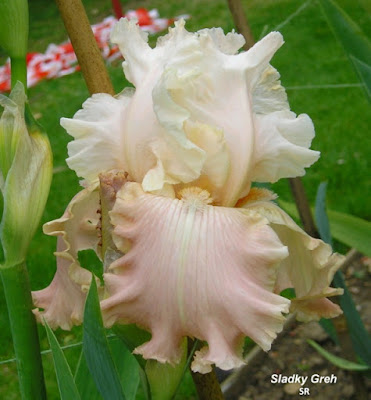